I’m on a roll against huge STL file sizes! You can look back at some of the past story here, but in summary I have a complex section of a design that started off being a collection of separate truncated octahedron parts. When saved as an STL, the file size was 259MB, which for something only the size of an Up! Plus 2 print plate, was pretty ridiculous.

It took me a lot of mucking around but eventually I reduced the STL file size by merging all those separate parts to form a single solid within Solidworks. That’s the 104MB pictured above.

Now I have just discovered the freely available MeshLab software, which in a matter of seconds has simplified the mesh to half the file size, without compromising quality. Now if you’re a 3D printing nerd like me, that’s cool! I’m sure with tweaking this could be further reduced, which is important since the part I’ve been testing is only a portion of a larger product, and I need it to be less than 100MB for uploading to i.Materialise in the future.

If you’re keeping score you may know that I’ve been losing against the might of HUGE file sizes and failed 3D prints (check out the last attempt here). Looks like my luck is turning!

This is the truncated octahedron segment that was meant to print the other day, with an STL file size of 259MB. My hunch about turning the assembly into a part file and combining all the solid bodies (which takes at least half an hour!) has finally come good, with an STL file now less than half the size at 104MB. Happy Days 🙂

The issue has been one of overlapping geometry, which Solidworks seems to hate – rather than each truncated octahedron perfectly lining up, they are actually about 0.02mm away from perfection; a detail that has taken weeks of on and off experimentation to get right! So if you want my hot tip, stop trying to model so damn perfectly! 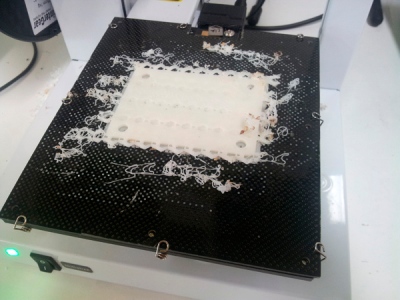 Well the picture says it all – fail! As mentioned in an earlier post, I’m playing around with a truncated octahedron structure. I put this 3D print on at uni (Up! Plus 2 printer) late yesterday afternoon with a 13.5 hour print time, expecting to find it all nicely completed this morning. For those using 3D printers regularly like me, failure quickly becomes part of the norm (I feel like somewhere around 1 in 5 have some sort of error – what do you think?).

Looks like there were 2 failures; firstly the small pieces meant to be around the rectangle section in the middle haven’t stuck to the plate properly, causing some ‘fairy-flossing’. Secondly, after running the print again, looks like the extruder is clogged or dead. No material coming out, which is why this print (which was meant to fill the plate) doesn’t have piles of plastic everywhere. Time for some maintenance!

I also wonder if the file itself is causing any problems – still having file-size issues with the complex linear patterns used. This particular STL file is 259MB, and only accounts for about a fifth of the total final product…. Hmmm back to watching Solidworks crash trying to combine all the parts into a single solid, reducing the number of surfaces and therefore file size. Well that’s the theory anyway!

I came across the truncated octahedron during my Honours studies, researching shapes that would fill 3D spaces without leaving any gaps. Now that I have the time to get back to some of these ideas, I’m quickly blowing the Solidworks file size into the hundreds of MB’s! But the great thing about this shape is that it can print on the ‘Up! Plus 2’ 3D printer without any support structure, and is strong enough to stand on. In this photo you can see the CAD file and one of my 3D prints of a segment.

I’m currently looking at combining all the parts into a solid body as it seems to save a substantial amount of MB’s when converted to an STL file if everything is joined – I guess because there are less individual surfaces all intersecting. Just a pain to do!