These are 2 trophies that I’ve 3D printed for my second year class at Griffith University as awards for their current project designing lights for Yellow Goat. Nothing beats getting the students to work on real projects with industry, and adding an extra incentive with these trophies adds an extra competitive level and of course bragging rights for the winners! If you look back to one of the largest 3D printing projects I’ve tacked using desktop machines, the Mario Kart Trophy, you’ll see it’s not the first time I’ve used 3D printing to create a custom trophy. It’s turning out to be a great application of 3D printing since you can get really creative and produce them very cheaply (I wonder if trophy manufacturers are using 3D printing?). On the left is the trophy for the best design as picked by the team from Yellow Goat, and the trophy on the right is for the best team leader, chosen by averaging the marks of all team members and finding which team overall has the highest marks.

The 3D CAD modelling of this design was not as straight forward as most of the other designs on my website, so here is my workflow in case you’d like to try something similar (you don’t need the same software, just to understand the process):

As you can see I still ended up splitting the large goat piece in order to minimise support material, printing the body piece upside down with the legs in the air and gluing the head back on later. It took a few prints to get the smaller goat right, the middle image above showing some of the messy surfaces I was getting from the Up! Plus 2 printer I used, surprising since it’s normally very good. The ABS seemed a little more sticky than normal as well, meaning the support material didn’t just peel away but had to be scraped and cut, making more of a mess. But third time lucky! I also downloaded the human figure from Thingiverse to again save some time, and it gives the effect I wanted anyway. A bit of chrome spray paint, a chipboard base and voila!

Check out the 3D model above for the full effect of the low-poly design! 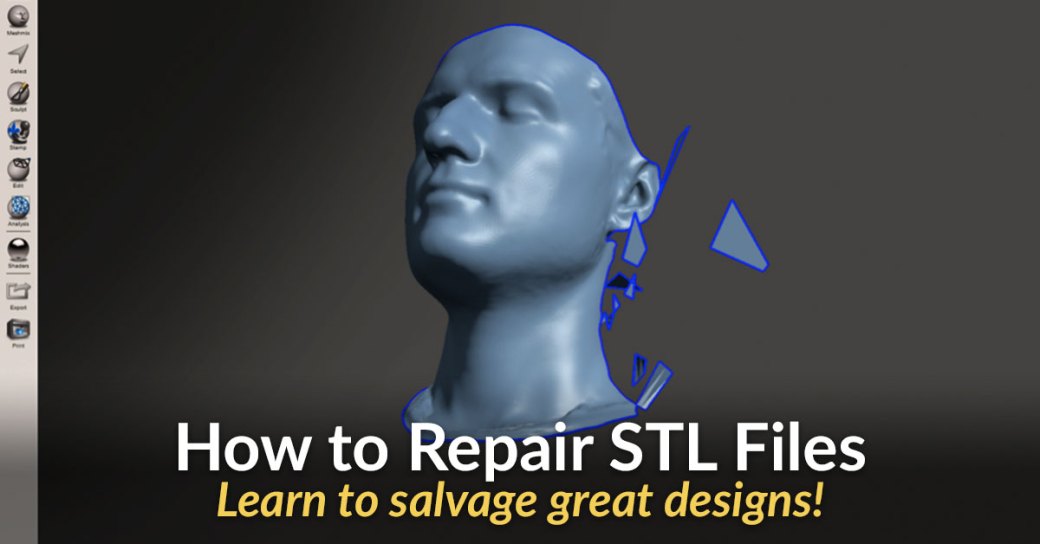 My first blog article for the new year for my friends at Pinshape is now available, and walks step-by-step through a number of common repairs you may need to make to your files prior to 3D printing – just click this link to read all about it and follow along. The main things covered are:

All of the tutorials use the freely available software Meshmixer from Autodesk, as it’s by far been the most user friendly tool I’ve found for working with .stl files, however you should have similar success using other free software like MeshLab or netfabb Basic. This tutorial builds upon another similar tutorial I wrote for Pinshape in 2015 called How to Modify an STL File: A Beginner’s Guide which shows you how to take a downloaded .stl (or one of your own) and begin customising it for your own needs, for example adding text onto the design.

1/2/2016 UPDATE: A new version of Meshmixer has just been released – Makezine has just posted a really good summary of some of the exciting new features http://makezine.com/2016/01/30/autodesk-releases-meshmixer-3/

UPDATE 30/03/2016: With the sad news that Pinshape has closed down (read more here), you can now read this article in the PDF below. 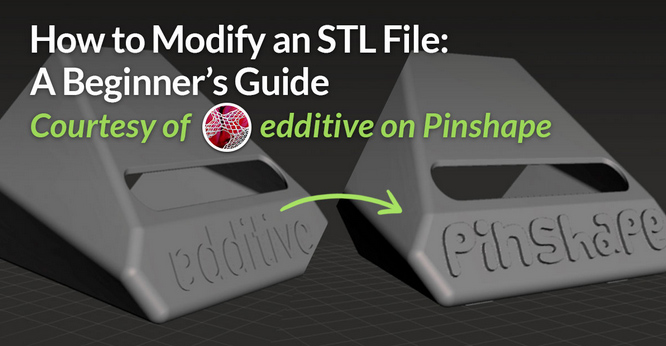 Have you ever wanted to modify a .stl file that you’ve downloaded from a website like Pinshape or Thingiverse? While .stl’s are tricky to work with (similar to a really low resolution image), there is free software out there that will let you both modify and repair files to your hearts content!

My first tutorial as a guest writer for Pinshape has just been published, showing you how to modify a .stl file in 10 easy steps – just click the link to check it out. It’s very exciting to be writing for them, and I hope it helps give you the confidence to start customising your 3D prints, as this is really one of the great advantages of 3D printing in the first place.

You can also look back to some of my own past tutorials that I’ve created whilst working on particular projects, including using MeshLab to add text to a .stl, or turning a 3D form into a low-poly model. I must admit that I’ve now discovered Meshmixer (as featured in the Pinshape tutorial), and think it is a far easier tool to use than MeshLab. Both are free so check them out and see what suits you.

– Posted by James Novak (aka. edditive)

UPDATE 30/03/2016: With the sad news that Pinshape has closed down (read more here), you can now read this article in the PDF below.

After a previous post where I listed my steps to printing success with the new Solidoodle Press, I am now on a roll with completing prints. My secret? Convert the Press to be more like one of the Up! series of 3D printers!

There are really only 3 key things you need to do this, 2 of which are obvious in the time-lapse photos above of my latest complete print of the Beer Bottle Lock:

I realise many people are having success using a variety of other hacks/fixes/additions which you can find on the useful SoliForum website, but this is my own twist on improving the Solidoodle Press. Also a big thanks to Solidoodle for releasing the new SoliPrint software version 1.1.1 which has corrected some of the bugs I initially wrote about.

Finally, below are some detailed photos showing a comparison of the print from the Solidoodle Press (pink), to the same file printed on the Up! Plus 2 (green). The main thing I’m noticing is that the Press does an average job of flat surfaces parallel to the print plate, failing to fill them in completely like the Up! Plus 2. But the other surfaces are quite good! Of course it’s important to keep in mind the Press is about a third of the price of the Up! Plus 2, so expecting the same quality is asking a bit much. Yet I believe if Solidoodle continue to improve their SoliPrint software, the quality could really come close to that of the Up! Plus 2. Time will tell.

If you have any questions about getting you Press to work, or want to share your own modifications, please post them in the comments section.

Following on from my previous work building the Google Cardboard and my own custom virtual reality (VR) headset, the logical next step was to try 3D printing a full headset. With limited time before an upcoming talk I’m giving on Virtual Reality and 3D printing, I have downloaded the OpenDive model freely available on Thingiverse. I chose this one because I was impressed with the lens holders (which I already used for my Hybrid Headset) and it seems to have the most feedback/reviews/likes out of all VR headsets on Thingiverse.

The most important point with this model is that I had to scale all parts down by 5% in order to fit the small print plate of my Up! Plus 2 3D printer. This was specifically for the main frame of the headset. I also had to use MeshLab to separate the other parts, as they are all grouped as a single STL file which also doesn’t fit the print plate.

Interestingly the seemingly thick sections of material which I was concerned about have already been given an infill pattern within the STL file, minimising material waste which was good to see. I think the Lens Holders are too tight fitting within this model, while the brackets for the phone (printed in green) feel too loose – I’d probably want to glue these into place before risking my phone in there!

Below you can see a time-lapse of printing the main headset – overall the complete model took just over 6 hours to print using the 0.2mm layer thickness and normal print speed.

Once again I’m finding MeshLab to be a must-have tool for manipulating STL files (read my previous post about using it to reduce file sizes by clicking here).

I’ve just downloaded the files for a Raspberry Pi B+ enclosure from Thingiverse (click here to get the free files) which I’ve started printing on my ‘Up! Plus 2‘ 3D Printer. However I wanted the Nintendo logo on the lid part rather than a blank surface. Enter MeshLab.

I started with extruding the text in Solidworks (image 1), and exporting this as an STL. Any CAD package should do this for you. Both files can then be opened within MeshLab ready to combine (something that can’t be done in Solidworks). The problem with MeshLab is that there is no simple way to align multiple files, unlike Solidworks parts where you would simply ‘mate’ surfaces together. Instead you must manually rotate and move the parts into the orientations desired. Not a big problem for simple parts like this where position and alignment don’t need to be perfect, it’s just for looks (image 2). Once in position, you can right-click in the layers panel, and use the ‘Flatten Visible Layers‘ tool to combine the STL’s into a single solid. Export this new file as a STL and you’re ready to print!

Stay tuned for some photos and details as I print this part out, along with the full enclosure.

As I sit here in a food-coma following Xmas, the most I can manage is a bit of CAD experimentation since I don’t need to move! Continuing on from a previous post about using MeshLab (free software to manipulate STL files), I’m creating some basic forms in Solidworks (where I can perfectly control dimensions), exporting them as STL files, then turning them into faceted/low-poly 3D models within MeshLab.

While this won’t give perfect geometric control of the final shape, it can give a very quick faceted form relatively close to the original dimensions. Within MeshLab the above example is using the ‘Clustering Decimation’ tool (from the top menu go to Filters>Remeshing, Simplification and Reconstruction>Clustering Decimation). Within this setting, the ‘World Unit’ used for the image above was 15, resulting in 48 faces.

I’ve also had some success using this particular tool to reduce the overall STL file size of some complex forms, just takes some experimentation. However if you want to really control your faceted 3D model within Solidworks, check out an earlier tutorial I’ve written by clicking here.

I’m on a roll against huge STL file sizes! You can look back at some of the past story here, but in summary I have a complex section of a design that started off being a collection of separate truncated octahedron parts. When saved as an STL, the file size was 259MB, which for something only the size of an Up! Plus 2 print plate, was pretty ridiculous.

It took me a lot of mucking around but eventually I reduced the STL file size by merging all those separate parts to form a single solid within Solidworks. That’s the 104MB pictured above.

Now I have just discovered the freely available MeshLab software, which in a matter of seconds has simplified the mesh to half the file size, without compromising quality. Now if you’re a 3D printing nerd like me, that’s cool! I’m sure with tweaking this could be further reduced, which is important since the part I’ve been testing is only a portion of a larger product, and I need it to be less than 100MB for uploading to i.Materialise in the future.