I’ve been throwing out teasers about this project on social media for over a year, and with my research just published in the Rapid Prototyping Journal, it is very exciting to finally be at the finish line and able to share it – all of it! So what exactly is it?

Well, it’s a 3D printed stool. But more than that, it’s the outcome of a design for additive manufacturing case study using the new BigRep ONE 3D printers, housed in the ProtoSpace facility at the University of Technology Sydney. The BigRep ONE is essentially a desktop FDM 3D printer on steroids, with a build volume measuring 1005 x 1005 x 1005mm, that’s over 1 cubic meter of space to 3D print! And much like a desktop FDM printer it uses filaments like PLA, PETG, TPU and realistically just about any other filament material, as well as using a Simplify3D profile for slicing, so designing for the printer and operating it is identical to many common desktop 3D printers. 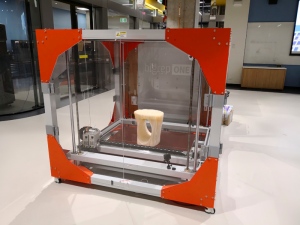 Given the newness of these machines when they were installed in ProtoSpace in early 2018, my job was to test the capabilities of them whilst developing a showcase product to highlight how they can be used to develop new types of products, and with such a large build volume, furniture was an obvious choice. However, my budget was not unlimited ($1500 AUD) and nor was the time I was allowed to run the printer, which was capped at 5 days so that it was not taken out of commission for other users for more than one working week. Sounds like a generous timeframe unless you’re familiar with just how slow FDM printing is even at the desktop scale, and while this printer is bigger, it is certainly not any faster. And when you are printing for 5 days, this machine will really chew through filament, so that $1500 budget quickly runs out.

In terms of the fingerprint concept, the stool was designed when I was newly engaged and uses a fingerprint from my (now wife’s) ring finger, and my own. Awwwwe… There are few features more unique to each human than a fingerprint, so this concept was also chosen as a truly unique feature that highlights the capacity for 3D printing to be used for one-off personalised products.

The above video helps explain the design and printing process, which essentially involved:

Sounds nice and straight forward. However, I must admit things did not go this smoothly: Firstly, designing to fit a specific budget and print time required several iterations, with an early version of the design twice as large as the design pictured here. This meant initial cost estimates were in the range of $2194-3882 and print times 117.5-216.1hours – talk about variation! All of this variation is due to experimenting with process parameters like layer height and nozzle diameter for the same design, and was an important learning process that could be taken back into later iterations of the design, which ultimately became smaller.

Secondly, another obstacle we struggled with was bed adhesion. This is a common problem with desktop machines, however, not normally when printing with PLA. We quickly found that during the first layers, a slight warp or piece of material sticking up would get knocked by the extruder, causing a knock-on effect as the extruder and any material it had collected quickly cause all of the individual sections of the fingerprint to dislodge. Pictured above on the left is the largest section that printed before some material snapped off and somehow caused the nozzle to become entombed in PLA, pictured above on the right. That was an expensive error, new nozzles for the BigRep ONE do not come cheap!

Given the design was intended to print without any need for support material, we eventually had to concede defeat and add a raft. This had the effect of linking all of the initially individual sections of fingerprint together during the first layers, and provided a strong adhesion to the bed. While we could’ve tried all sorts of glues, tapes and other hacks, we didn’t want to resort to these on such a new machine until we had more time to test settings and work with BigRep on a solution. The good news: the raft worked and after 113 hours, and at a cost of $1634 (only slightly over budget), the Fingerprint Stool was complete. The raft did take 1 hour to remove with a hammer and chisel (with a 1mm nozzle there is so much material it cannot be removed by hand), and the surface finish is quite rough – but in my mind this is the charm of FDM, just like a piece of timber has grain and knots that are simply part of the material.

Overall the BigRep ONE is an exciting technology, you just need to keep in mind that due to the scale, all of the small issues you can experience on a cheap desktop machine are also magnified. However, it is great for producing large-scale functional parts like furniture, or any of the other examples you may have seen from BigRep in 3D printing news over recent months.

This is a brief overview of the project, there is much more technical information and analysis in my paper in the Rapid Prototyping Journal, including metrology data of the final design compared with the 3D file, as well as surface roughness data. I’d love to hear your feedback on the project or your own experiences with the printer if you’ve been lucky enough to use one. And keep an eye out for updates about the stool appearing in an exhibition later in the year 😉

UPDATE: Thank you to BigRep for taking an interest in this project and writing their own story about it here, and to 3D Printing Industry for also sharing this story.